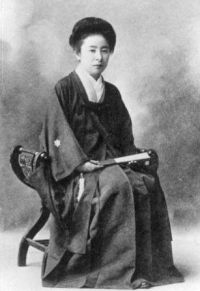 Utako Shimoda, the founder of Jissen Women's Educational Institute, came to prominence at the end of the 19th century, a time when little thought was given to the status of women in society. She was one of the first to be able to see that the basic solution to improving the status of women was in women’s education, an ideal that she strongly believed in and devoted all her efforts to putting into practice.
Jissen Women’s Educational Institute founded the Shimoda Utako Research Institute on April 2014 to study the spirit of Utako Shimoda, who had searched for a suitable way of life for women in this new era in the first decades of the 20th century and tried to display this widely to people.

We renamed it The Shimoda Utako Research Institute for Women in April 2018 to promote interdisciplinary and comprehensive women’s research while engaging in the study of Utako Shimoda and Jissen Women’s Educational Institute.
By pursuing the spirit of the founder in the present day, we can conduct research in the contribution toward the empowerment of women with the aim of realizing a vibrant society in which women can fully participate.